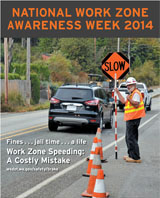 Today marks the beginning of National Work Zone Awareness Week 2014. In an effort to reduce accidents, injuries and deaths in highway construction work zones, the American Traffic Safety Services Association designates a week at the beginning of the construction season each year to promote safety initiatives. National Work Zone Awareness week was initiated in 1999 and has been effective at improving the safety of motorists and workers while reducing work zone crashes.  This year’s initiative kicks off today, April 7th, 2014, with events being hosted in Seattle, WA.

This year’s theme focuses on the dangers and risks of speeding through highway construction work zones.  “In 2012, 609 workers and motorists were killed in highway work zones nationwide. Approximately 85 percent of those killed in work zones are drivers and their passengers.”  Surely speeding played a role in a significant percentage of these accidents.

The National Work Zone Awareness Week 2014 kickoff event will be held on April 8, 2014 at 10 AM in Seattle Washington.  The event is hosted on State Route 99 at the Alaska Way Viaduct Replacement Program project. For more information, visit the following websites.

We encourage you to drive safe in support of this worthy cause!